2015: Priorities for a Planet in Transition 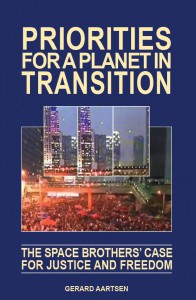 Beyond speculation and sensationalism, this book brings together a significant body of information about life on the other planets in our solar system, as reported by contactees the world over. By showing the similarities among the stories of the original contactees and providing a relevant context through observations about the state of the world, it uncovers how the reports of the contactees are really about the crisis facing humanity today. In his trademark style the author weaves together their accounts with political events, economic developments and scientific insights.

Readers will find this book packed with a mass of facts that have until now been ignored or only considered in isolation, and many will find it an education to see these elucidated against the background of the Ageless Wisdom teaching. Through a ‘critical synthesis’ the author gives us compelling insights into the causes of humanity’s problems, as well as the solutions that the Space Brothers have been suggesting since the 1950s. As it links together an abundance of sources, this book provides many answers and leaves us with only one question: ‘How could we have missed this?’

“…Aartsen manages to present his information in an authoritative manner without ever sounding strident or polemical. Backed by a broad-based knowledge, not only of his subject but also of esoteric literature, his writing is lucid end objective. … The book, and the story it tells, make for absorbing and informative reading.”
– Marc Gregory, Share International magazine, January/February 2016
Read more in English | Spanish | Dutch | French

“Every once in a while a book about extraterrestrial contact comes along that is refreshing to read. This is such a book because it exudes so much hope and optimism, in times that surely are challenging. Priorities contains a treasure trove of deep insights and common sense wisdom about how we, as a society, should approach our current situation.”
– Manuel Lamiroy, JAR Magazine, February 2016
Read more in English

“…a refreshing, interesting, thought-provoking and enjoyable read. A great book with an abundance of research, giving us cause to re-examine the relationship we have with other planets, the solar system and the universe, including the bigger picture on our relationship with ETs or the Space Brothers.”
-Daniel Sims, UFOlogist magazine, Vol.19, No.6, March-April 2016

“The Space Brothers see humanity in crisis and, while not wanting to interfere with our free will, explain that we need to restore our moral compass, attend to spiritual realities and organise society so that no one is disadvantaged. (…) The wisdom from space still resonates.”
–Nexus magazine, Vol.23, No.4, June-July 2016

The Dutch edition was reviewed in Spiegelbeeld magazine, Vol.24, No.1, January 2017.