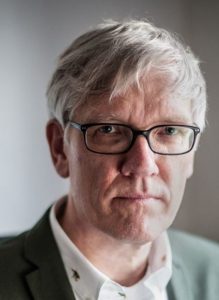 Gerard Aartsen (1957) is an author, speaker, researcher and educator from Amsterdam, the Netherlands.

He has been a lifelong student of the Ageless Wisdom teaching, which holds that at the beginning or end of each cosmic Cycle (or Age) a Teacher returns with a new revelation about the source and evolution of consciousness that needs to be given expression by living according to the Golden Rule to establish right human relations. His many years of study and research resulted in the online reference ‘Our Elder Brothers Return – A History in Books‘ (2008).

Gerard is also the author of eight books about the extraterrestrial presence, which he sees as further evidence of the evolution of consciousness and the universal manifestation of Life. In his books he takes the accounts of the original 1950s ‘contactees’ as a starting point, dating as they do from before the time when the narrative about ET visitors was contaminated by deliberate disinformation to contain the growing public interest in their calls for international cooperation during the Cold War. He was the first to explicate a method for qualitative research into claims of contact, for which he uses the transdisciplinary synthesis approach. His research into George Adamski signalled a thorough reassessment of this major case of contact, and led to his re-discovering of Adamski’s forgotten first publication, The Invisible Ocean, in 2018.

Several of Gerard’s books have been translated and published in multiple languages and his articles have appeared in magazines around the world. Gerard is a frequent guest on international radio shows about UFOs and related subjects, and has lectured about his work in America, Europe and Asia.

Gerard has a Master of Education (M.Ed.) degree from the Amsterdam University of Applied Sciences (AUAS), the Netherlands. After travelling the world as a backpacker in his late teens/early twenties, Gerard settled in Amsterdam as a translator. Around age 40, he reinvented himself as a teacher of English and soon became a teacher trainer at AUAS, where he held a teaching position at the School of Education since 2001 and continues to mentor students in their teaching practice today. In addition to education, the Ageless Wisdom teaching, and the extraterrestrial presence on Earth, he also has a keen interest in Renaissance and Modernist art.