2010: George Adamski – A Herald for the Space Brothers 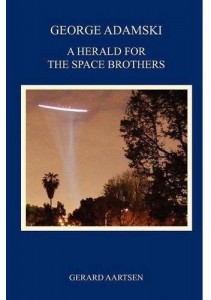 The most famous of the ‘contactees’ since the advent of the UFO phenomenon in the second half of the 1940s, George Adamski (1891-1965) was all but forgotten after he had become the victim of a brutal disinformation campaign to discredit his experiences and ridicule his mission.

This book provides a unique and comprehensive overview of Adamski’s teaching and focuses, for the first time, on the true significance of his mission to inform humanity of our spiritual nature, our interplanetary brotherhood and the need to take responsibility for our home, planet Earth.

Using Adamski’s own words where possible, and making connections that have thus far been missed or ignored, this book shows how Adamski’s work as a harbinger for the Space Brothers and their teachings fits in squarely with the Ageless Wisdom tradition as handed down through the ages by the Elder Brothers of humanity – the Masters of Wisdom with whom Adamski studied as a teenager. In doing so this book places his mission in a context larger in scope than even most of his supporters could have fathomed.

“…Gerard Aartsen rehabilitates Adamski’s reputation in the light of the Ageless Wisdom teaching… Adamski still has a message to teach us about the universality of life and the individual responsibility required to make our world a better place.”
– Nexus magazine, February-March 2011

“…a refreshing look… Aartsen succeeds admirably with his main aim of presenting information about Adamski’s life, experiences and philosophy that many would not have known about.”
– Michael E. Salla, PhD, Exopolitics News, August 2010
Read more in English | Czech

A Spanish translation is in progress.